The electromusic specialist began designing and assembling his studio in New York in 1994. The initial purpose was to have a live setup that he could use to construct songs directly on the dance floor with few pre-written sequences.

Many of his synthesizers and drum machines were self-engineered from recycled, discarded electronics; converted into chaotic but solid techno music machines. From the transistor up they were engineered for raw bass power and allowed stray noises and malfunctions to become part of the recording or show.

The main foundation pieces of equipment at the time were his "CMS-01" modular synth, "Modularhythm System-3" drum machine, and "Sputnik Voice Processor SVP-02" vocoder. After his first couple records, EMS started to incorporate some commercial synthesizers into his studio to fill out tracks for the third record with plenty of live-performed layers without having to multitrack, but instead doing a 1 shot composite recording. Some of his most-used additional instruments were the Oberheim SEM, Sequential Circuits Pro-1 and Roland SH-101, which contained several modifications and enhancements. 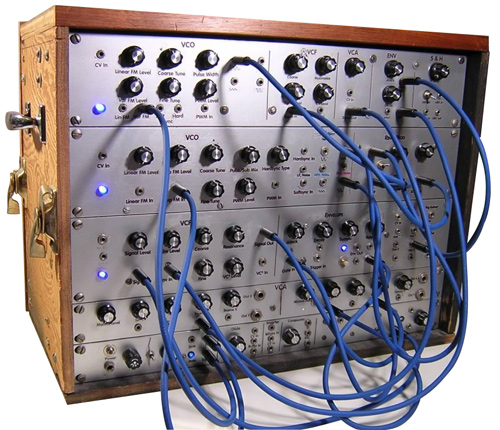 VCO 1
Based on an old design which is mostly discrete, this VCO is quite temperature sensitive. This one was fun trying to keep in tune every time someone opened the door or cranked up the fog machine. Cold makes the pitch go flat on this unit. Other than that, it has a very warm sound and has a massive frequency range.
Listen to: Rhythmus Machine
VCO 2
Standard 1970s "3340" oscillator design with sub bass.
Listen to: EMS acid/switch mix
VCF1
Diode ladder filter.
Sample & Hold
Labeled S&H, this little component helped a lot at shows. To fill the silence between live or DJ sets this one was patched in to VCO2 with a slow clock for sample rate and the voltage was output to a self-oscillating VCF1. Lots of blips and bleeps that could be tweaked to sound like computers from early scifi movies. Some notes could shake the floor with bass where the next could hang on almost inaudible high frequencies.
Listen to: Sample and hold example
LFO
Well, this might as well have been called HFO since it was mostly used as a high-frequency modulation source often applied to a VCF. The sound from that kind of patch is described as "talkie" because at certain settings you can almost hear vowel sounds. The component is on the bottom left, look for the small blue LED.
Listen to: Gemini 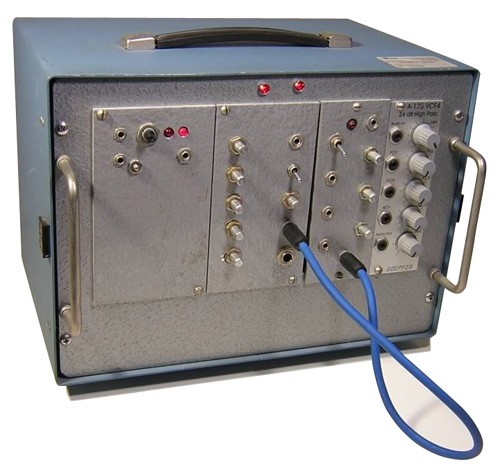 This box is a one-stop techno kick. It is based loosely on a TR-909 kick with several patch points. There is a trigger extractor which allows the kick to be fired from any punchy input such as a gate, trigger or even single hit audio sound. The Doepfer high-pass filter is not part of the kick unit. 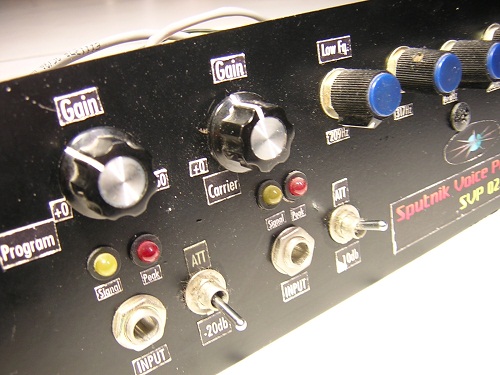 The SVP-02 vocoder is based on a combination of several designs. It has a stereo output and each band can be panned to either the left or right side. The lowest band was tuned down for deep bass.